Two years ago, Duncan’s Crossfit gear store was going just how he had hoped it would.

Revenue was coming in reliably, suppliers were consistent, and reviews were positive. He had put in his work, set up his supply chain and just had to check in a little bit each day. Otherwise, the business was good.

But then space got more crowded. Suppliers became less reliable. A few products stopped selling. No worries, he thought, we’ll get through this. He hired a supply chain expert to handle the day-to-day and trained him to be ready for things once the holiday rush came.

But then everything started falling apart. The “expert” wasn’t up to the challenge and what was becoming a more challenging environment quickly turned into a chaotic situation. Duncan had to go into emergency mode.

Supply Chain Fail: Out Of Stock At The Worse Time

The perfect storm came at the worst possible time too. As Duncan’s store was preparing for the holiday rush, he realized his best selling items were out of stock. That meant that thousands of dollars of revenue were left on the table.

The expert, who Duncan had spent hours and hours training and coaching, had no answers. Chaos set in.

Duncan had to step in last minute, retake over the entire operation, and do it all in emergency mode. He was able to salvage some, but not all of what was going to be lost that selling season.

And then he vowed to make sure that would never happen again. He’d never see another holiday season go by with supply chain or stock issues. Even more than that, he vowed to never see those issues ever again.

But at that moment, he had a whole bunch of work to do. He had to re-take over his supply chain, and reverse the damage done by the expert that he hired. It meant extra hours to be put in. Duncan buckled down.

“I Just Wasn’t Doing Anything Strategic”

Duncan found himself doing exactly what he hoped he wouldn’t have to. He was now spending more time than ever before working on the operations and supply chain of his store.

What had been a 1-2 hour per day project was now 3 or 4 hours every day as he worked to clean up the mess that had been made.

And he found it wasn’t just the mess, wasn’t just what the “expert” had left in their wake, but also what Duncan hadn’t done in the months he had been complacent. When sales were good, he didn’t both tinkering or optimizing much. Now he was regretting that.

Those months, he said, “I wasn’t doing anything strategic.” He couldn’t focus on thinking about growth or new products or studying the market to see why some items had stopped selling. He wasn’t able to launch new ad campaigns or targeted marketing. He was calling suppliers, going through disorganized sales orders, and piecing his company back together.

He knew once he was done he would get back to thinking about growth and strategy.

Duncan came to SellerPlex to help him handle his supply chain — to improve his business, to get it running smoothly again and without fail. To never need to save the day again. “I can’t say SellerPlex ‘saved the day’ because I had to step in and do that. But I can say that SellerPlex makes it so the day never needs saving again.”

“I can’t say SellerPlex ‘saved the day’ because I had to step in and do that. But I can say that SellerPlex makes it so the day never needs saving again.”

Duncan went through SellerPlex’s onboarding and eventually offloaded the supply chain work he had hoped to do months before. And what he said was this:

“What I realized with SellerPlex was that I could have all of these issues handled without needing to put in any more time myself. In fact, I could spend less time on my business supply chain and more time on thinking what products I could add next.”

He started seeing the number of hours he had to put in decrease down to one sixth of the time he was spending. With each day that he worked with the SellerPlex team, he was able to hand off more of his day-to-day. He felt the freedom opening up to really think about his business again. 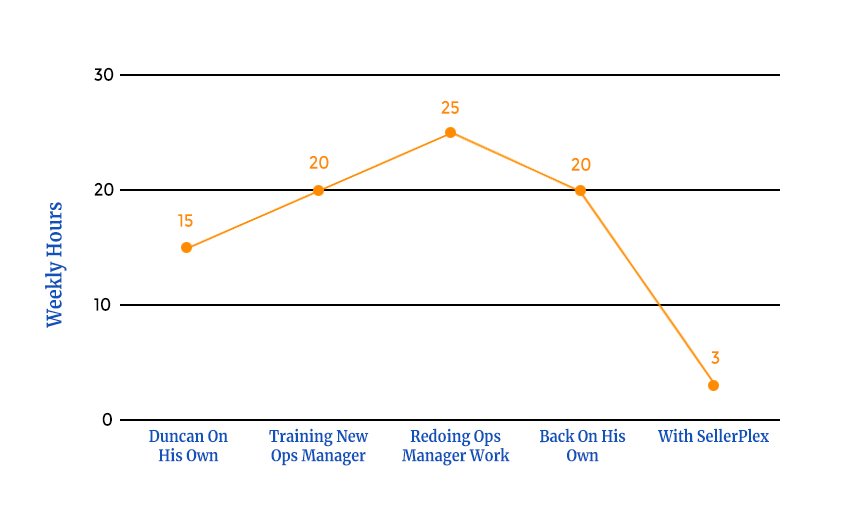 And the work being done was good. Duncan felt the stress he felt slip away, as well as the worry that he might be working with another "expert" that could drop the ball. He started to see this was going to be different.

Soon, Duncan was so confident in the SellerPlex team running his supply chain, he stopped feeling the need for constant check-ins. Eventually, he set up a system for two weekly calls, each of about an hour, to go over everything happening with his store.

2 calls each week. And the rest runs on its own.

These calls cover the state of his operation, any adjustments needed, and time for Duncan to ask the team questions and vice versa.

"That’s it", he said. That’s all he needs. He’s freed up to use the rest of his hours to look into the two or three products he wants to expand to this year.

“SellerPlex has taken all stress out of everything”

Although master lists and documents are filed for him, he doesn’t think he needs to look at them. The check-in calls suffice and the rest of his time he has the peace of mind knowing his business is being handled.

Duncan was back where he wanted to be. Thinking about new products and the direction of his business. “Now I’m doing the right kind of work”, he said.

According to Duncan, the calls are not helping him only as a "report of the work being executed", but are also valuable consultation sessions where he learns a lot about his own business, playing a big role in his evaluation of the next steps to take, as SellerPlex has a solid experience in scaling businesses like Duncan's.

Not Getting Complacent With Figures

Duncan’s advice to Amazon and eCommerce entrepreneurs is not to get complacent with early results. That was a mistake he made and it almost cost him his business. Certainly it cost him the revenue from one holiday season (and maybe more).

He cautioned folks not to take their hands off the wheel, even if the road ahead looks clear. And to vet any “expert” you may want to hire. It may mean you have to do even more work if things aren’t done right the first time.

We agree with Duncan. A business never stops having needs and requiring adaptation. That’s the very nature of the beast. But if you’re like Duncan, you don’t want to have to be at the wheel every day of your life—especially after you’ve put in the hard work already. That’s where SellerPlex can help you.

Be like Duncan—have SellerPlex run your business and supply chain and check-in with our team twice a week. That’s it! 30-60 minutes twice per week and you can keep your pulse on what’s going on behind the curtain. We’ll do that part and clean up any mess that might pop up, while you focus on your next production, acquisition, or exit.